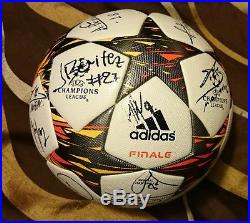 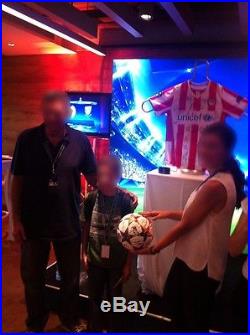 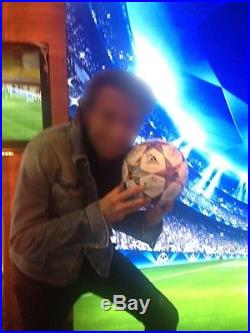 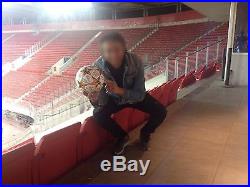 In the first pictures you will see the actual ball signed by the hands of the Olympiacos players that the winner of this listing will receive, in the following pictures you will see me holding this actual ball back in 2014 just after I have won it in and in the last photo you will see close ups of an exactly similar Adidas ball but of course without the authentic signatures of the Olympiakos team players on it, this is just a sample photo. Adidas soccer ball details adidas Finale 14 Match Ball – White and Solar Red. Competition: 2014/15 UEFA Champions League. Model: Official matchball Finale. FIFA Quality Mark: FIFA Approved A. FIFA Quality id: 202. A1S not really sure if S is actual an S because it has a signature on it. If you are interested in this item then please do not hesitate, send me your offer and i will consider it! I have won this original and official match ball signed by hand one by one from most of the Olympiacos players listed below. I have won this ball on the 16th of September 2014 during the UEFA official champions club pre match celebration. It is a unique authentic Fifa approved ball like the photo I have included BUT it is also signed the same day by hand from the best players of Olympiakos football team. Olympiacos or OSFP is a Greek team – A real champion team! 8 Delvin N’Dinga. Group stage (Group A) – 16/09/2014 – 20:45CET (21:45 local time) – Stadio Georgios Karaiskakis – Piraeus. Olympiacos 3 – 2 Atletico. Bertino Miranda (POR), Paulo Soares (POR). Manuel De Sousa (POR), João Capela (POR). Olympiacos stun Atlético in five-goal thriller. Olympiacos FC 3-2 Club Atlético de Madrid. Last season’s runners-up could not quite recover from conceding two first-half goals as Míchel’s men put down a marker in Group A. Olympiacos’s Arthur Masuaku opens the scoring with a sensational strike. Ibrahim Afellay doubles the advantage after Alejandro Domínguez’s determined run. After near misses, Mario Manduki pulls one back on his competition debut for for Atlético. Kostas Mitroglou breaks his ten-month goal duck with the third for the hosts. Substitute Antoine Griezmann hits back for Atlético from close range. Olympiacos FC pulled off one of the shocks of matchday one with a 3-2 Group A victory over last season’s runners-up Club Atlético de Madrid in Piraeus. Arthur Masuaku gave the Greek title-holders a dream start after 13 minutes when he drilled in a low shot on his UEFA Champions League bow and the visitors were stunned further when the hosts doubled their lead through Ibrahim Afellay just after the half-hour. Mario Manduki reduced the deficit seven minutes before half-time, but the visitors were hit by Kostas Mitroglou’s 73rd-minute sucker-punch his first goal for ten months. Although Atlético substitute Antoine Griezmann set up a breathless finish with a late close-range effort, Míchel’s men hung on for a remarkable win. It took 13 minutes for the first real opportunity and it brought a goal for the home team. Alejandro Domínguezs short corner was laid off to Masuaku by Afellay and the French left-back, 20, beat Jan Oblak with a sensational low strike from just outside the area. Atlético coach Diego Simeone, serving a touchline ban, showed no emotion from the stands and, far from being cowed, Atlético seized control. Manduki twice and Raúl García went close with three headers in six minutes. Then, against the run of play, Olympiacos stunned Atlético by going 2-0 up through Afellay. It came courtesy of a lung-bursting run and cross from Domínguez; Mitroglou’s ensuing dummy caused confusion between Diego Godin and Miranda, and the ball broke for Afellay to finish clinically. However, with the interval looming, Manduki finally found the target, escaping his marker Éric Abidal to nod in Cristian Ansaldis precise centre and cut the arrears. Griezmann replaced Gabi in the second half for Atlético and the French international twice almost levelled for the Spanish champions, his first snapshot drawing a flying save from Olympiacos keeper Roberto and the second being tipped around the post. Yet it was Olympiacos who got on the scoresheet next, with Mitroglou superbly controlling Pajtim Kasami’s cross before swivelling to fire past Oblak. It was the Greece forward’s first goal since netting for his country in the FIFA World Cup play-off against Romania last November. Griezmann then scored from Koke’s superb cross but the hosts held firm. 16 2014 champions club. The item “Olympiakos signed autographed Adidas ball UEFA Champions league OSFP vs Atletico” is in sale since Wednesday, December 07, 2016. This item is in the category “Sports Mem, Cards & Fan Shop\Autographs-Original\Soccer\Balls”. The seller is “shopday.gr” and is located in ATHENS, ATTIKI. This item can be shipped worldwide.