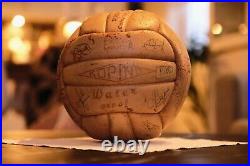 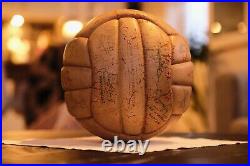 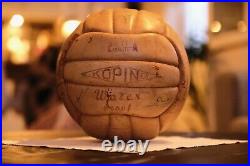 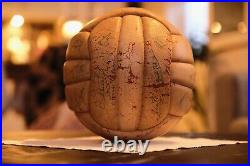 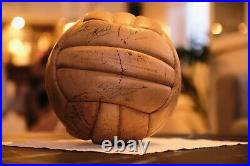 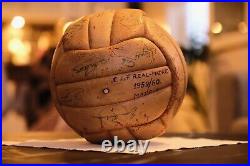 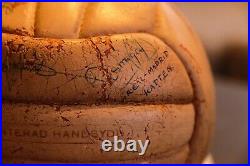 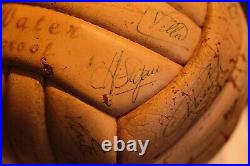 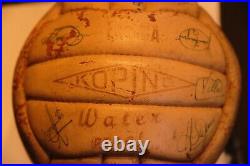 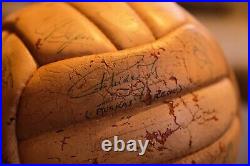 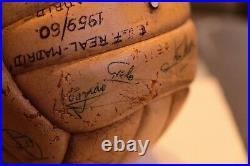 This ad is not finished. This item is extremely rare and high priced This ball was signed by Real Madrid when they played two pre season matches in Sweden in august of 1960, against Djurgården and Göteborg. This signed ball was given to a Norwegian who had businesses in Sweden and supported Swedish football on many levels, also financially according to his family. I bought this ball from his grandson in 2011. The ball had been stored cold and dry over many years, and the deterioration process has been good and as expected. The ball has 25 signatures. I have not identified all the signatures, but many are very obvious when you see which players played in the matches. 15 different players played those two matches, but there is no information on the rest of the squad, at least that I have found. This was Real Madrid´s lineup against Djurgården. Domínguez, Marquitos, Pachín, Santamaría; Vidal (Santisteban 45´). Zárraga (Antonio Ruiz 45´); Canario, Del Sol, Di Stefano, Puskas (Mateos 45´), Gento. This was Real Madrids lineup against Göteborg. Domínguez; Marquitos, Santamaría, Pachín; Vidal, Zárraga; Canario, Del Sol (Mateos 45´). Di Stéfano (Pepillo 45´) Puskas, Gento. If you have any questions, do not hesitate to ask. The price in this ad is incorrect. The asking price is much higher. About the ball in an Norwegian news paper. The item “1960 Soccer ball signed by Real Madrid team, Alfredo Di Stéfano, Ferenc Puskás ++” is in sale since Wednesday, October 28, 2020. This item is in the category “Collectibles\Autographs\Sports”. The seller is “tobiaschristensen” and is located in BODØ. This item can be shipped worldwide.