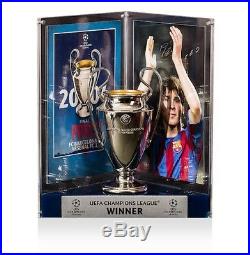 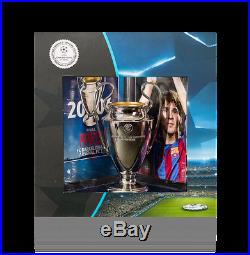 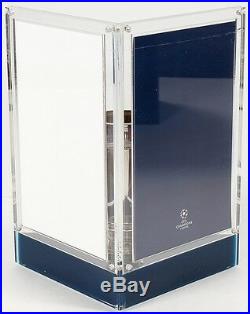 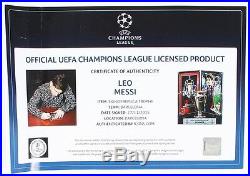 LIONEL MESSI Signed Barcelona UEFA 2006 Replica Trophy Display ICONS. LIONEL MESSI Signed Barcelona UEFA 2006 Replica Trophy Display – Icons Authenticated. Lionel Messi is often considered the best player in the world and rated by many in the sport as the greatest of all time. Messi is the only football player in history to win the FIFA Ballon d’Or five times, four of which he won consecutively, and the first player to win three European Golden Shoes. With Barcelona he has won seven La Liga titles and four UEFA Champions League titles, as well as three Copa del Rey titles. A prolific goalscorer, Messi holds the records for most goals scored in La Liga, a La Liga season (50), a calendar year (91), a single season (73), a Champions League match (five), and most Champions League seasons (five). As an Argentine international, Messi has represented his country in six major tournaments. At youth level, he won the 2005 FIFA World Youth Championship, finishing the tournament as its best player and top scorer, and an Olympic gold medal at the 2008 Summer Olympics. His style of play as a diminutive, left-footed dribbler drew comparisons with compatriot Diego Maradona, who declared the teenager his successor. This special product contains a signed Lionel Messi photo showing the global superstar during Barcelona’s triumphant 2005-06 UEFA Champions League campaign. The photo comes mounted on a clear frame behind a miniature replica of the UEFA Champions League trophy as well as alongside artwork representing that year’s final. Please note This is a mini replica trophy and therefore the size of the piece as a whole (including the mount and photo frames) is 9 inches (height) x 8 inches (width) x 5 inches (depth). All Official Messi Signed Merchandise is created under license by Icons Shop Ltd and comes with an Official Messi Signed Merchandise Certificate of Authenticity, which has an image of Leo signing the product. Icons are Leo Messi’s official and exclusive signing partner and have been signing with the superstar since 2006. History of item : Messi signed this item&#######xA0;in the presence of a representative from Icons Authenticated. Describe how you came to possess this item : Game Day Legends is a fully authorized dealer for Upper Deck Authenticated as well as Panini Authenticated, Mounted Memories and Steiner Sports. Other information about you and / or the item : Game Day Legends strives to deliver the most authentic in sports memorabilia from trusted companies like Mounted Memories, Steiner Sports and Upper Deck Authenticated. If it exists, we can find it for you! Game Day Legends is your online source for signed sports memorabilia from Michael Jordan, LeBron James, Peyton Manning, Kobe Bryant and many more athletes. The Company’s core focus is not only to provide the best lineup of authentic sports memorabilia available, but also to deliver a first-class customer service experience that can’t be found through any other distributor. Since 2000, Game Day Legends has worked hard to establish itself as one of the most trusted and recognized companies in the sports memorabilia industry by providing sports fans with a high-quality investment and a unique piece of history to add to their priceless collections. At Game Day Legends we understand that for many, sports memorabilia is more than just a collection or a hobby, it is an investment that can be handed down from generation to generation. Unparalleled expertise in Upper Deck’s line of authenticated sports memorabilia, as well as other top authenticating companies like Fanatics, TriStar, Panini Authenticated and Game Day Legends Authenticated. Our Guarantee is simple: Our products are from the most reputable companies in the industry carrying authentication from brands like Upper Deck Authenticated (UDA), Fanatics, TriStar, Panini and Game Day Legends Authenticated. The excellent reputation of each supplier we do business with is the reason we stand behind every item we sell. Since our inception in 2000, we’ve built relationships with the most reputable memorabilia companies in the business. At Game Day Legends, w. At Game Day Legends, our primary goal is to provide you with the best possible customer service experience. We see excellent customer service as a way to earn a customer as opposed to earn a sale. We encourage you to reach out to us via the Message Center to voice any concerns you may have about your order. If at the end of your order process you are not completely satisfied, then neither are we. We will also be requiring a photo of the item you received, showing any discrepancies, as the reason for return. If your product is damaged we require that you notify us within 48 hours of receipt, all claims after this period are not eligible for return. View more great items. LIONEL MESSI Signed Barcelona UEFA 2015 Replica Trophy Display ICONS. This listing is currently undergoing maintenance, we apologise for any inconvenience caused. The item “LIONEL MESSI Signed Barcelona UEFA 2006 Replica Trophy Display ICONS” is in sale since Tuesday, March 26, 2019. This item is in the category “Sports Mem, Cards & Fan Shop\Autographs-Original\Soccer\Balls”. The seller is “gamedaylegends” and is located in Huntington Beach, California. This item can be shipped worldwide.