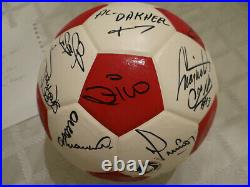 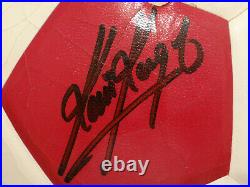 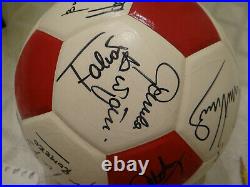 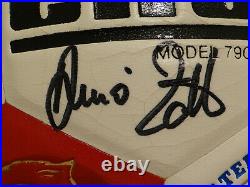 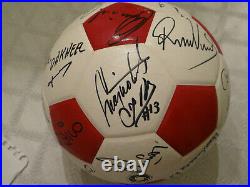 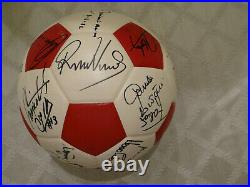 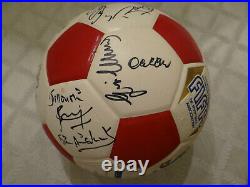 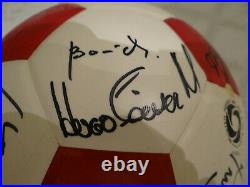 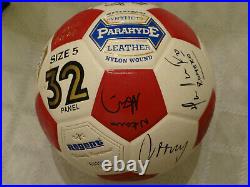 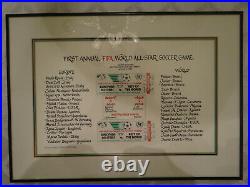 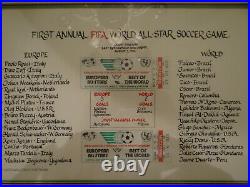 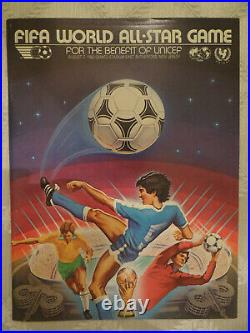 Soccer Ball Signed by 1982 FIFA World All-Stars Beckenbauer, Zico, Platini, Keegan, Rossi, Falcao etc. , with framed display, game tickets, game program, and video. The Story Behind the Ball. My father was a vice president at 3M during the early 1980s. The company was aleading sponsor of the first FIFA World All-Star Game, which was held on Aug. 7, 1982, in Giants Stadium, East Rutherford, New Jersey, a few weeks after the1982 World Cup ended in victory for Italy. The game pitted Europe against the Rest of the World, with many of the greatest players ever Beckenbauer, Platini, Zico, Paulo Rossi, Falcao, Socrates, Zoff, etc. As a VIP, my dad was invited to the event and put up in a Manhattan hotel with the players. Aged twelve, I tagged along. We mingled with the players throughout the weekend, brazenly collected the signatures that appear on the ball, and ogled the supermodel-types who were the players girlfriends. The ball comes with a rare game-day program; a framed display featuring game tickets and the participants names hand-rendered in calligraphy; and a DVD of the game. The participants in the game were. Franz Beckenbauer, West Germany. Harold Schumacher, West Germany. Jose Roberto Figueroa, Honduras. Julio Cesar Arzu, Honduras. These signatures can be easily read. These more free-style signatures can be easily un-puzzled with some Google research. Theres no mistaking them. These signatures can be inferred/guessed with a fair degree of confidence. Osvaldo Ardiles, Argentina (see below). Rossi has signed his name quickly and sloppily, but you can make out what look like the triple lower-case es that are the hallmark of his signature. I suspect a graphologist would easily identify the signature as Rossis. There are five signatures that are difficult to identify and six remaining players (Arzu, Bogicevic, Coelho, Figueroa, Stojkovic). My best guess is that Bogicevic signed the ball, as there is a signature beginning with B. Its very likely some participants in the game did not sign the ball, while otherscelebrity players who were on hand but not on the game-day rosterdid sign. Theres one signature that clearly begins with an A. I believe that this signature belongs to Osvaldo Ardiles of Argentina. He was supposed to play in the game but did not. I seem to recall that he was present at the event. Im almost positive that he signed the ball. Theres a signature beginning with an A and mounted by funny diacritics that I cannot begin to identify. It may be Arabic. Theres another name beginning with what looks like an O that eludes me entirely. There is a signature that looks like Fa Lu Fo. This must be a nickname. If anyone recognizes it, please let me know. The ball shows hairline cracks in keeping with its age. The item “FIFA World All-Stars Signed Soccer Ball Zico, Platini, Beckenbauer, Rossi, Etc” is in sale since Saturday, March 20, 2021. This item is in the category “Sports Mem, Cards & Fan Shop\Autographs-Original\Soccer\Balls”. The seller is “fanoffubaoshi” and is located in Chapel Hill, North Carolina. This item can be shipped to United States.